The release of DDR5 RAM memory modules has computer enthusiasts around the world are eagerly awaiting the day they can plug one of these memory modules into their computer and watch it cut through data processing tasks like a knife through butter. We’ve been hearing some rumors that DDR5 RAM will cost slightly more than DDR4.

One of the first really interesting parts of the development of DDR5 is that for the first time RAM is being developed on a SODIMM first basis.

Since 2016 scientists have been working to develop this new technology, with the first working prototype units already having completed successful testing in 2017. For the first time in generations, it was an American company, Rambus, which released this working version. The Koreans, always on the cutting edge of technology, released their version via Hynix a little after in 2018.

So What’s the hold up?

Samsung has also announced they are working on a DDR5 chip set they plan on releasing this year. For now though, the issue is the lack fo compatible mother boards and CPUs that can work with DDR5 UDIMM and SODIMM chips. And that is, there are no CPUs currently available for consumers to take advantage of the benefits offered by DDR5 technology.

Where does Intel and AMD Stand on DDR5 RAM Compatibility

So far neither company has announced chip launches that offer compatibility with DDR5 RAM Technology. However, there’s been some leaked slides from internal company documents that seem to indicate Intel will be featuring this ability as early as 2021 in their famous Sapphire Rapids microarchitecture.

As of June 2020 we’ve yet to hear from AMD. But they are looking to jump the gun on Intel and offer it starting some time mid to late 2020 in their ever popular and Epyc CPUs. However, there’s other rumors that have it AMD won’t be able to get their chips out by 2020 or even 2021. Some say the first AMD units to feature DDR5 RAM will be in 2022 on their Zen 4 CPUs. Since AMD has not made any official announcements, we’re currently just left discussing rumors.

What’s So Special About DDR5? 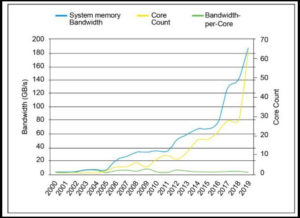 In this case, the first DDR5 Chips will offer just about double the data rate compared to the last DDR4 chips. However, the biggest promise is to really help maximize the current generations of CPUs where the number of cores offered to most consumers really exploded. Just a few years ago the average high end laptop had a maximum of 4 cores where as now it’s quite common to see laptops that have up to 16 cores. This means more cores, more bandwidth more memory needs.

Another really exciting aspect of the release of DDR5 RAM units is the amazing decrease in size standards. This allows manufacturers to really cram more memory into the same amount of space. So far, it’s still in development, but we should expect significantly larger single sized memory units.

Another really interesting aspect is the continued decrease of needed voltage. In the case of DDR5, the first generation chips are expected to shave off about 10% off the lowest consumption DDR4 SODIMM RAM chips. The first DDR5 RAM modules have already achieved 1.1 V but there’s talk about some of Samsung models being 1.0 V right off the bat.